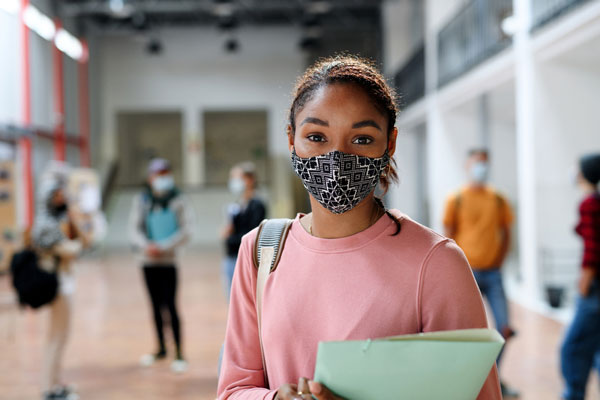 Due to the pandemic, we see some of the largest self-response declines within our college communities, as many campuses were being closed at the time when census materials were being distributed in March.

The first wave of data from Census 2020—the statewide numbers used to apportion congressional seats—will be released in the near future after multiple delays.1

Those who have followed the news about the decennial census know that Census 2020 has been plagued with a variety of problems that have raised accuracy concerns. The best way to ensure an accurate census is for households to “self-respond”—i.e., fill out the form themselves (online, by phone or by mail)—and not rely on the Census Bureau to follow-up and gather that information itself. In fact, “low self-response rates are correlated with people being missed in the census.”2

Census tracts are small, relatively permanent subdivisions of a county used for statistical purposes. They generally follow visible and identifiable land-based features and have between 1,500 and 8,000 people, with an optimum size of 4,000 people.4

Figure 1 shows that 292 of the state’s tracts had 80% or more of households self-respond to the census, while 328 tracts had less than 60% of households respond. The tract with the lowest self-response rate in the state (22.2%) is in Gary (Lake County)—that particular tract reports a very high vacancy rate according to the most recent American Community Survey.5 The tract with the highest self-response rate in the state (91.9%) is within Carmel (Hamilton County).

One area of particular concern (nationwide) are college communities. Due to the pandemic, we see some of the largest self-response declines within our college communities, as many campuses were being closed at the time when census materials were being distributed in March. The pandemic also complicated non-response follow-up in these areas during the late spring and early summer months.6 It is important to note that those who live in dorms on campus were counted during the group quarters enumeration, so the low response rate concern revolves around students living off campus.

Indiana has nine counties where student enrollment surpasses 10,000 (see Table 2). In six counties, the student population makes up more than 10% of total population—led by Monroe County (Indiana University) at 29%.

Bold indicates counties with significant college student populations either in numeric (more than 10,000 students) or percentage (more than 10% of total population) terms.

Note: The underlying enrollment data for public schools is full-time enrollment, while private school data includes both full- and part-time enrollment. Community colleges, such as Ivy Tech, are not included for our purposes here since they largely serve the resident population.
Source: Indiana Business Research Center, using data from the Indiana Commission for Higher Education (public school data for FY 2018), CollegeSimply (private school data for academic years 2019/2020 and 2018/2019) and the U.S. Census Bureau (2019 population estimates).

Figure 3 shows the tract-level response rate for the counties with significant college student populations (either in numeric or percentage terms), alongside the remainder of the state.

Not all of the poor response in these counties can be traced to the student population. For example, the tracts with the lowest response in Allen, Knox and Lake counties are not campus related. However, out of the 26 tracts in the state with the largest declines in response rate (i.e., more than 15 percentage points), 16 would appear to be impacted by poor off-campus student response.

In particular, both Monroe County and Tippecanoe County (Purdue University) have four tracts where response rates were less than 45%—representing declines between 15 and 30 percentage points.

As more 2020 census data gets released throughout the coming year, researchers here at the Indiana Business Research Center will give extra scrutiny to those areas with low self-response rates to see if any anomalies arise in the final data for Indiana. Results of our review will be made available on the Census in Indiana website (www.census.indiana.edu/), as well as in InContext.