Update (7/16/2021): The OMB has rejected the recommendation to double the population threshold to qualify as a metropolitan statistical area. It will remain at 50,000. 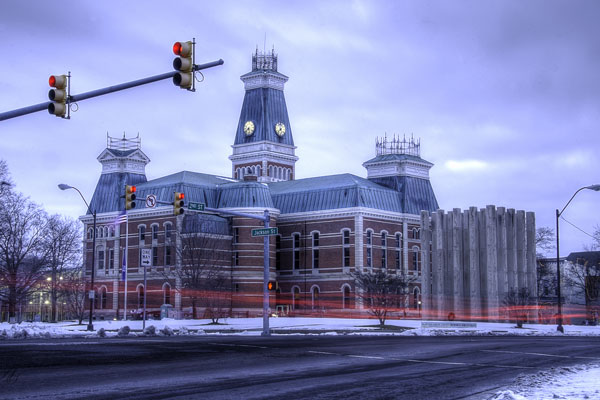 Bartholomew County's historic courthouse is in Columbus, Indiana. Columbus is one of five MSAs in the state that could lose its metropolitan status under the proposed guidelines.

Metros, micros, metropolitan areas, metropolitan statistical areas—for anyone who uses federal data, these words mean something. They tell us about a geography that is not political or municipal, as opposed to cities and towns, counties, or even townships.

Metropolitan statistical areas are a geographic concept, a standardized way of organizing groups of counties that was first developed back in the late 1940s to help federal government with a so-called “single set of geographic delineations for the nation’s largest centers of population and activity.”1 Even earlier than that, the U.S. Census Bureau had come up with what they termed industrial districts, for the Census of Manufactures and used a metropolitan district formulation that grouped together townships (otherwise known as minor civil divisions).

Note: These maps show the April 2018 vintage of the metros because the September 2018 vintage (minor changes) are not yet reflected in the data released by the U.S. Bureau of Labor Statistics.
Source: Indiana Business Research Center

On Jan. 19, 2021, a notice was filed in the Federal Register to request public comment on the proposed changes to these geographic standards by the Metropolitan and Micropolitan Statistical Area Standards Review Committee, chaired by James D. Fitzsimmons. We want to alert Hoosiers to these proposed changes to redefine these metropolitan areas—which may reduce the number of MSAs we have in Indiana. These definitions can impact how Indiana is “seen” by site selectors, businesses, the media and the economic development community writ large.

Currently, Indiana has 12 metropolitan areas where the core county is in Indiana; an additional three metro areas have an out-of-state core county but include one or more Indiana counties. We also have 24 micropolitan areas, which are distinguished by having a core city with a population of at least 10,000 but less than 50,000. And finally, we have seven combined (super) metro areas within Indiana and have Indiana counties that are part of an additional three combined metros (Chicago, Louisville and Cincinnati) in contiguous states.

The new recommendations call for metropolitan areas to have an urbanized core with a population of at least 100,000, in part because the core size of 50,000 hasn’t been changed since the 1950s. The net effect of this in Indiana (and much of the Midwest) would mean that five current MSAs—Michigan City-La Porte, Kokomo, Muncie, Terre Haute and Columbus—could be demoted, if you will, to micropolitan status. This will depend on results from the 2020 Census, of course, but Figure 2 shows the urbanized areas in Indiana (and across the country) potentially impacted based on the last census in 2010.

Figure 2: Metropolitan statistical areas with an urbanized core of less than 100,000

Note: This map uses the September 2018 vintage of the statistical area delineations. Population is based on Census 2010.
Source: U.S. Census Bureau

There are six key recommendations the committee has put forward to OMB. The big deal here is increasing the population threshold for MSAs to a starting point of 100,000 population.

While this may seem a somewhat arcane regulation, it can impact how Indiana is seen across the country. We encourage our readers who have an interest, nay a vested interest, in how their communities are shown through the data provided by the federal government to read the notice and submit your comments.