Assistant Director, Research and Analysis Division of the Indiana Department of Workforce Development 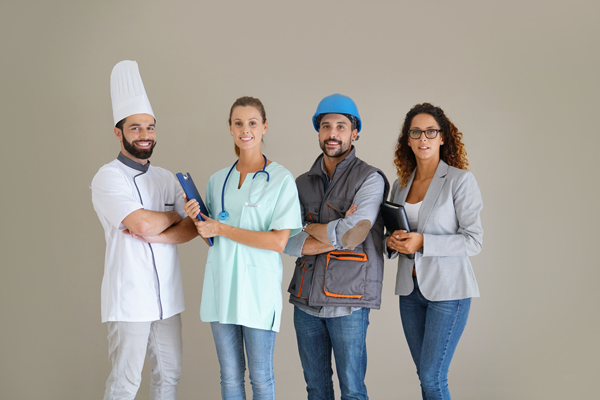 Because there is nearly an infinite number of occupations, the six-digit SOC code system was developed as a federal standard to classify jobs into occupation groups.

Data that come directly from the people who work (via the American Community Survey) or from the employers (via the Occupational Employment Statistics program) are sampled and used to produce occupation estimates. It is important to note that these surveys are carefully sampled to provide an insight into what jobs people hold, but they can still be subject to limitations. Often the issue involves declining response rates and the nonmandatory nature of most surveys. This is where administrative data have an advantage since they can reduce response burden and enhance data integrity.

Administrative data refers to micro-data which are collected for nonstatistical purposes and used mainly for administering services and programs.1 Some examples include records on enrollments and completions in higher education, as well as wages. Wage data represent one of the most frequently used sources of workforce data and can answer questions ranging from how much are certain occupations pay to how much certain college graduates earn.

Indiana has an existing longitudinal data infrastructure that contains wage records collected from employers each quarter. Every employer is legally required to report the wages paid to their employees in Indiana.2 To facilitate collection of wage records, employers use the Employer Self Service/Uplink web application3 where they can manually enter their employees’ wages or upload a file containing wages. Up until early 2019, employers were required to provide employees’ wages, names and Social Security numbers. Using other employer administrative records, we can determine industry of employment but not occupation. This means it was possible to tell if a person worked in the health care industry within a hospital, but it was not always possible to determine whether that person’s occupation in the hospital was a surgeon, an administrator, a cook or a social worker. To get a clearer picture of the labor market, Indiana started collecting occupation data from employers and requesting each employer to report Standard Occupational Classification (SOC) codes for their employees.

How do SOC codes work?

Because there is nearly an infinite number of occupations people can have, the six-digit SOC code system was developed as a federal standard to classify jobs into occupation groups.

In 2017, Indiana received a Workforce Data Quality Initiative grant from the U.S. Department of Labor’s Employment and Training Administration to create an infrastructure that would allow collection and analysis of occupation data. In early 2019, Indiana joined Louisiana and Alaska in requesting occupation data directly from employers. To facilitate determining and reporting occupations for their employees, employers can use the occupation coding tool on the Hoosiers by the Numbers website. The tool uses job titles to suggest several different occupations. To determine the most appropriate occupation code, the employer can type the job title in the search box. A number of occupation codes will populate and the employer can click on each of them to see a short description of tasks associated with that occupation.4 To explore more about the occupation, the employer can click on an external link (O-NET Detail) that offers a more extensive list of tasks for each occupation (see Figure 1). This allows them to select the most appropriate occupation code based on the tasks their employee is performing. 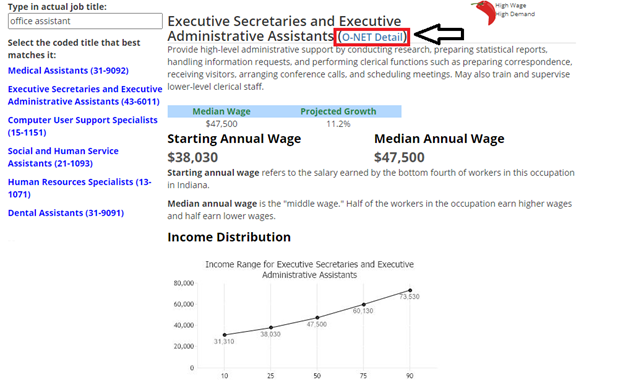 Source: Hoosiers by the Numbers from the Indiana Department of Workforce Development

All workers are classified into one of the 459 broad or 867 detailed occupations. For illustration, let us look at how the granularity of the information changes within the broad category of general food preparation and serving occupations (35-0000).

The first two digits in the SOC code 35-0000 designate the major group and will tell us the general occupation group. The group “Food Preparation and Serving Related Occupations” consists of occupations like chefs, cooks, servers, bartenders, dishwashers and hosts. If we have a person’s general occupation data, we will know that the person likely works in a restaurant or a bar, but we will not know if they are a chef or a host.

The second two digits in the SOC code 35-2000 represent the minor group. These digits give us more detail on the person’s occupation and tell us they are neither a chef nor a host, but work on cooking and food preparation.

Looking at the third two digits in the SOC code 35-2010 tells us the person works as a cook. Cooks and food preparation workers have different skills and responsibilities. While a cook is responsible for ensuring the food is cooked to the appropriate temperature, they are also responsible for supervising the work of other kitchen staff. A food preparation worker usually prepares the food to be cooked and does not have supervising responsibilities.

How can occupation data be used?

Collecting occupation data directly from employers represents an important expansion of the longitudinal data and allows for a more accurate account on career pathway intelligence. This means that Indiana will be able to better support research and evaluation efforts. For example, we will be able to analyze employment and occupation outcomes for people in different stages of their careers. Also, we will be able to see what jobs people hold after graduating from college or participating in a training program. Similarly, we will get a more accurate picture of the talent pipeline coming from Indiana’s correctional system. This information will help us understand how people move from one occupation to another.

How much employment recovery should we expect for Indiana's metro areas in 2021?