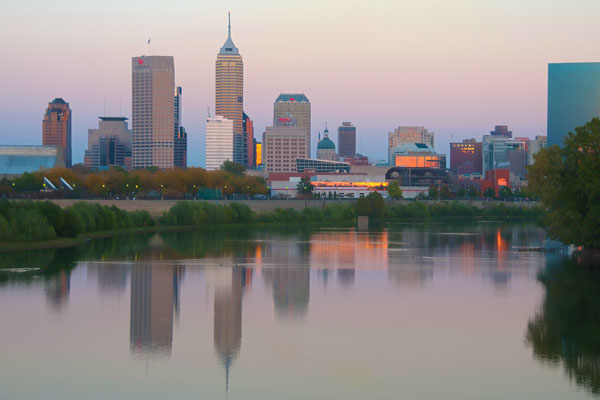 Indianapolis continues to draw in talent and investment that should help it exceed the overall state level of growth.

Economists from around the state recently shared their forecasts for Indiana’s metropolitan statistical areas (MSAs) during the Indiana Business Outlook Panel tour. One common theme throughout the state was increased uncertainty stemming from national economic issues, such as the ongoing trade disputes.

Here are some highlights from our panel of experts in terms of local employment trends and expectations for 2020. For the full analysis, check out the complete Outlook 2020 issue of the Indiana Business Review.

Anderson (Madison County) has finally recovered from the Great Recession. The number of jobs in Madison County has been steadily increasing since 2011 and totaled 39,448 during the first quarter of 2019—slightly higher than the previous year and about even with pre-recession employment (2007 Q1). In the coming year, employment is expected to remain stable.

Employment in the Bloomington metro has steadily grown. In June 2009, 75,226 people were employed and estimated employment for September 2019 was 79,166—a growth of 5.2 percent. While current U.S. trade policy raises uncertainty, it is reasonable to be cautiously optimistic about Bloomington’s economic outlook. The major industries that comprise the local economy are projected to continue to perform relatively well in the future.

From 2011 to 2018, Columbus metro nonfarm job growth ranged between 200 and 4,200 annually, resulting in a total increase of 11,200 jobs. In the first nine months of 2019, job growth of approximately 200 positions reflects an increase in nonfarm positions of less than 1 percent. Still, Columbus’ September unemployment rate of 2.0 percent (not seasonally adjusted) is the lowest September unemployment rate since 2000. Unemployment is expected to increase slightly to 2.5-3.0 percent in 2020, with new participants entering into a market with essentially no job growth.

After eight years of expansion, the regional economy slowed down in 2019. Employment in the combined regions averaged 270,515 for the first eight months of 2019, a modest increase of 1,947 workers from 2018. This marks the smallest job gain for both metros in recent years. In 2020, several negative factors will confront the Elkhart-Goshen economy, including declining RV sales and the ongoing trade war with China. The RV sector might scale back its production. Consequently, the unemployment rate will be higher in 2020, trending up to 3.5-4.0 percent. South Bend-Mishawaka’s economy is more diversified than Elkhart-Goshen’s and is dominated by service production. Although the manufacturing sector is likely to further contract next year, the service sector will continue to grow in 2020. Hence, South Bend-Mishawaka is expected to see modest growth in 2020.

During 2019, relatively strong growth in both the transportation and warehousing and management of companies and enterprises sectors—combined with increases in personal income and announcements of future fixed investments—provide the basis for projecting increased employment, output and income in 2020. In 2020, the number of jobs in the metro is projected to increase by 1,557, while the unemployment rate is projected to be 2.9 percent.

Fort Wayne has enjoyed solid employment as a result of the extended economic expansion. With the national and local economy being interrelated, what’s happening across the globe easily affects Fort Wayne. At the end of 2019, the leading indicators for the national economy show signs of slowing down. If the economy continues as is, the Fort Wayne MSA unemployment rate could range between 2.8 percent and 3.2 percent in 2020, staying well within the full-employment range. In other words, the tight labor market that favors workers could continue for yet another year. But with so many uncertainties on the global and national horizons (including the effects of the trade war, a global economic slowdown, sluggish productivity, and the widening gap between productivity and wages), it is harder to predict exactly when Fort Wayne’s economy will be affected.

In 2019, Northwest Indiana grew slower than the state of Indiana and the nation overall, and this will likely be the case again in the coming year. Despite this lack of substantial economic growth, in recent years, Northwest Indiana has shown evidence of a healthier industry mix of employment. This evidence, coupled with positive growth in population for the first time in years, suggests improving economic fundamentals that may support greater economic growth in the coming years. In 2020, employment is likely to grow at a modest rate (+0.7 percent), including greater employment in the higher-paying service-providing industries.

The labor market in the Indianapolis market continues to perform very well for workers, and there is steady job growth. Unemployment is hovering around 3 percent and is likely to remain low throughout 2020. Indianapolis continues to draw in talent and investment that should help it exceed the overall state level of growth. However, there is risk that weakness in the broader economy—and especially weakness in manufacturing—could make this forecast too optimistic. Given the election coming at the end of 2020, consumers and managers should be aware that the coming year could be quite volatile economically.

Employment growth has continued, with the number of jobs in Kokomo (Howard County) increasing 3.7 percent since January 2018. These growth rates are, however, slowing down. Generally, the unemployment rate in Howard County rose and fell in alignment with the U.S. and Indiana, staying between the state and national rates. Several leading economic indicators are beginning to point in the direction of a slowing economy. With that would likely come an increase in unemployment, especially for manufacturers. With the region’s heavy dependence on manufacturing, it finds itself more exposed to risk from an economic downturn.

During 2019, the MSA experienced a somewhat puzzling 2.9 percent drop in employment, or nearly 3,100 jobs. The losses came from the government sector, namely state and local government positions. A few other service-providing sectors experienced employment drops, such as retail trade, professional and business services, and financial activities. The goods-producing industry sector gained nearly 1,000 jobs—mostly in manufacturing—but it was not enough to offset the losses from the service-producing industry sectors. Nevertheless, the region is still poised to experience job growth through 2021, so the tight labor market will continue.

For 2019, the Louisville metro will surpass job gains from 2018. The Louisville metro added approximately 5,000 jobs over the year in 2018, compared to about 7,600 jobs in 2019, based on a three-month rolling average of year-over-year payrolls. While we are seeing slight improvement from last year, the Louisville metro continues to lag national payroll growth. In 2020, expect job creation for the Louisville metro to trail the nation, but with a higher rate now expected in Southern Indiana compared to recent years. Still, reports from workforce development personnel and business owners continue to point to the lack of an available workforce. Limited growth in the labor force will continue to serve as headwinds to overall job growth. The ability of the region to grow services, particularly professional and business services, will play a large role in the ultimate record for 2020.

Muncie is in the midst of a long, slow recovery. The labor force and unemployment rate showed some variation over the year as more people entered the labor force looking for jobs, but in the latest reported data, both indicators decreased. Nonfarm employment had a small decrease in 2019 for the second year in a row and is still about 2,000 jobs lower than pre-recession levels. The forecast for 2020 shows flat employment growth for the Muncie region.

The private sector in Richmond (Wayne County) maintained about the same number of jobs (-7) in the first quarter of 2019, whereas its public sector suffered a loss of 42 jobs, as compared with the first quarter of the previous year. Still clouded by a lot of uncertainties in the global trading system and the lack of improved confidence in doing business in the area, Wayne County and the region will likely not see much growth in 2020. While interest rate cuts will help ease the cost of doing business, firms might hold back on their hiring and/or pay raises depending on the industry and their exposure to the global trade tension. The unemployment rate is expected to continue swinging a little around the 4 percent threshold through next year.

The current state of the Terre Haute regional economy is good. The labor market remains tight, with historically low unemployment. Nevertheless, some significant closures and workforce reductions have recently caused this rate to drift upward just a bit. Though construction jobs associated with a few major projects will surely boost the local economy through the end of 2020 (and perhaps beyond), we are decidely pessimistic about the region’s long-term economic future. The manufacturing and educational sectors seem to be losing steam as engines of local growth, while the principal new initiative—a casino—is in an industry that typically generates lower-paying jobs and has a dubious record of generating lasting economic growth. Absent a transformative relocation of significant manufacturing or financial services to the community, it may be that 2020 and 2021 will be the last good employment years for a while.

Visit www.ibrc.indiana.edu/ibr to read the in-depth metro analyses, as well as projections for the nation, state, financial markets and more.