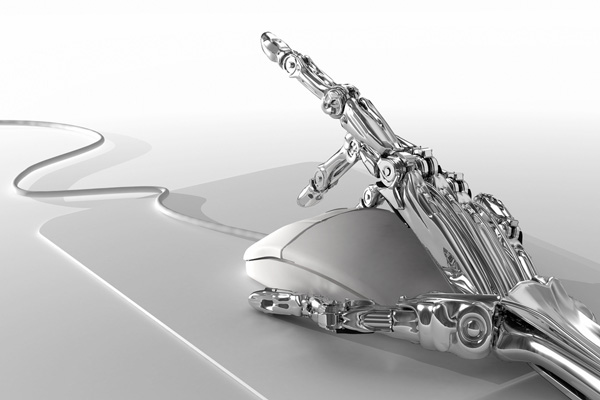 The work most of us do today is influenced by both automation and globalization.

Just google it—future of work—and 495 million results pop up. Walmart has even paid for an ad so it appears first in the results (so we can find out what Walmart is doing vis-à-vis “the future”). After reading and often just skimming a few hundred of these results, one conclusion seemed inevitable—the future is already here.

The work most of us do today is influenced by the automation and globalization of the past few years—or even the past few months. The work of people in Indiana has been influenced by technological change for more than two centuries. Think about it—canals allowed for faster transport of goods from the Midwest to eastern states (and vice versa). Then railroads killed canal transport and helped move people and work throughout the entire country and to the middle and northern parts of Indiana. The industrial age moved people from farms to cities. And the car—well, its impact has been huge.

Our demographics have also imposed changes on the work we do. When the vast majority of women moved into the workforce, there was a concomitant increase in the number of restaurants, fast food chains and supermarkets. Strip malls popped up along every major traffic way, to aid in the convenience of stopping to buy things before and after work or during lunch breaks. Our commercial “infrastructure” reflects how we commute to and from work, not just where we live.

And with those changes, jobs have shifted in Indiana from making things (goods-producing) to providing services (see Figure 1). Many of us go through our workdays never interacting with anyone who works on the front lines in construction or manufacturing. Instead, we interact most often with people we serve or who are serving us—with dinner, a legal paper (you’ve been served!), or with an idea seeking investment in what might be the next technological disruption. The “knowledge” economy is everywhere, and it wants more and more knowledge workers with advanced and varied skills and the ability to be flexible.

Just look at the retail sector (see Figure 2). Back in 1990, at the very dawn of “the web,” there was no industry category for electronic shopping. There wasn’t one specifically for building materials and gardening equipment. By 2016, there weren’t just categories for those, but they employed nearly 50,000 people (about the number of jobs that Amazon says they will hire to staff the new HQ2, wherever it is located).

Just as industries change, so do the occupations within them. A couple of years ago, a pair of researchers, Carl Frey and Michael Osborne, published their investigation on how susceptible jobs are to computerization.1 It is heavily referenced and its scores of occupations in terms of most-to-least potential for automation are being used by a broad swath of folks in order to look at the possible impacts across our states and throughout the country. Table 1 and Table 2 provide a top 20 view of the most and least likely to be automated.

Table 1: Occupations with least potential for automation of tasks

Source: Carl Frey and Michael Osborne, “The Future of Employment: How Susceptible Are Jobs to Computerisation?”

Table 2: Occupations with most potential for automation of tasks

Source: Carl Frey and Michael Osborne, “The Future of Employment: How Susceptible Are Jobs to Computerisation?” 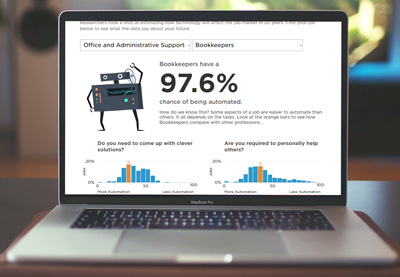 Far more fun, though, is this great tool built by the Planet Money people at NPR—simply called “Will Your Job Be Done by a Machine?” You can select a category and a job and let their robot tell you what the chances are.

The McKinsey Global Institute has a useful report, “A Future that Works,” that hones in on the proportion of our jobs that are “technically” automatable (see Figure 3).2 Many of us who came of professional age when there were more secretaries and administrative assistants know that Microsoft Office, doodle.com and other tools have more or less taken the place of a person. 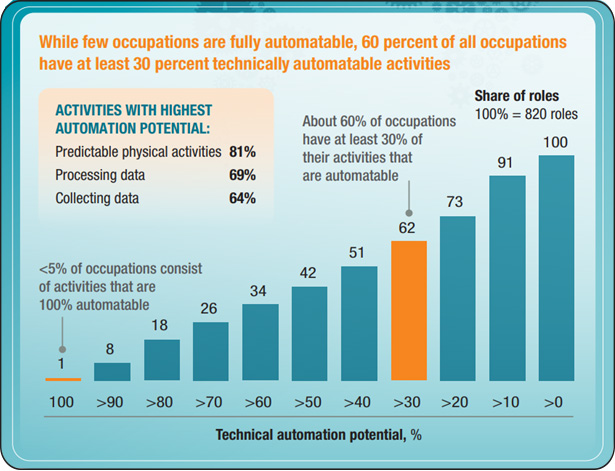 But take note: These and scores of articles on this topic approach automation as taking away jobs. The more likely reality is that automation will replace the routine, repeated tasks of many jobs and that more skilled tasks will be assigned. In addition, the concept of a “job” may be shifting from having an employer to being an entrepreneur or a contractor. The Nobel Peace Prize winner Muhammad Yunus, who pioneered microcredit (small loans at affordable interest), wants graduates to become job creators rather than job seekers.

We plan to publish more articles on this topic in upcoming issues, so stay tuned!