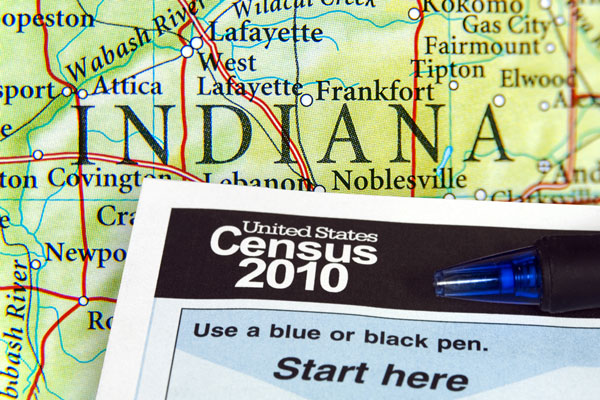 70% of Hoosier households responded to the census and did not require a visit from a census employee.

Conducting a national census is no easy task—made immensely harder this year by the pandemic, changing deadlines and eleventh-hour court battles over those shifting deadlines.1

When a household completes the form online, by phone or by mail, it is known as “self-response.” When households don't respond to the questionnaires, the Census Bureau must send fieldworkers to their addresses in an effort to collect their responses. This is called non-response follow-up (NRFU).

Indiana as a whole had a self-response rate of 70.0% (as of 9/30/20). When one adds in the data collected via NRFU, Indiana’s total enumeration rate goes up to 99.8%—one of the highest in the nation at the time of this writing.2

Since high self-response rates are correlated with more accurate data and lower costs, this article will focus on how many Hoosiers self-responded to the 2020 Census for various geographies. All data is reported as of September 30, 2020. (That date was supposed to mark the end of data collection according to the bureau’s third schedule, which was contested in court.)

Despite a year that was turned upside down by COVID-19, Indiana was among the states that ended up bettering their Census 2010 self-response rates in 2020, though just by 0.4 percentage points (see Figure 2).

Figure 2: Comparison of self-response for the past two censuses by state

Within Indiana, self-response ranged from 54.1% in Crawford County to 80.7% in Dubois County (see Figure 3). Roughly half of the state’s 92 counties had lower self-response than in the prior census, with a handful of counties (Crawford, Knox, Sullivan and Vigo) more than 5 percentage points below their Census 2010 self-response rates.

Not only do self-response rates vary dramatically from county to county, but they also vary within counties. Figure 4 shows these rates by tract.3 Most tracts (59%) actually had lower response rates relative to their Census 2010 rates, which is a topic we plan to discuss more in a future article.

Just about everything about this census has been difficult, and there are several worrisome questions still unanswered. For example, how much has the shortened NRFU timeframe undermined quality control, increased undercounts and lowered accuracy due to more use of proxy data? In fact, the American Statistical Association has stated:

“The percent of completed cases does not suffice to draw conclusions about data quality. For example, included in the tally of completed enumerations are households counted through a proxy response from a neighbor, including cases in which the proxy could provide no information beyond a guess of the number of individuals living in the household. In fact, meeting enumeration goals for a truncated deadline increases the likelihood of operational shortcuts that will jeopardize the quality of the count.”4

Will pushing ahead to try to meet the December 31 delivery of apportionment data shortchange the quality review process and introduce “fatal” data problems?5 What in the world are they going to do about accurately enumerating college towns?6 And to top things off, the bureau is rolling out a brand new differential privacy process that it is still in the process of fine-tuning.7

Nevertheless, as a state, we should at least find a tiny bit of satisfaction that—even in the middle of a pandemic—70% of our households responded to the census and did not require a visit from a census employee. The same cannot be said for many other states.

The comeback: How Hoosiers are recovering from the economic shutdown