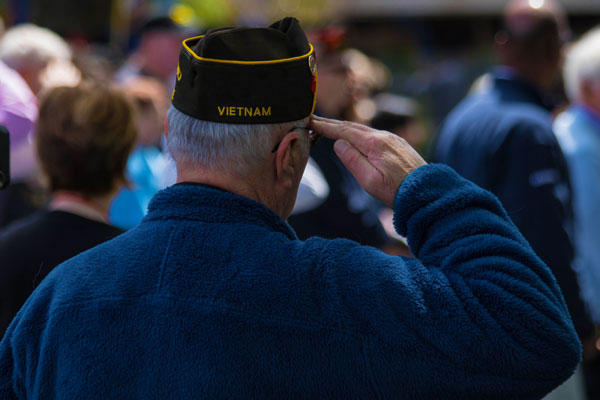 35 percent of Indiana's current veterans served during the Vietnam era.

The Department of Veterans Affairs estimates that 409,836 veterans lived in Indiana as of 2017.

Unsurprisingly, Marion County has the largest number of veterans at more than 51,600—roughly 5.4 percent of its population (see Figure 1). With 3,200 veterans, Miami County boasts the largest percentage of veterans (9.0 percent) relative to its total population.

To learn more about the state’s veterans, we turn to American Community Survey (ACS) estimates collected by the U.S. Census Bureau. It is worth noting that the ACS reports 386,929 veterans living in the state (+/- 9,270) as of 2017. This is lower than the estimates from the Department of Veterans Affairs—even when taking the margin of error into account. However, the ACS data provide important data on characteristics of those who served.

Approximately half of the state’s veterans are 65 and older (see Figure 2).

Figure 2: Number of veterans living in Indiana by age

The bulk of veterans served during the Vietnam era, as seen in Figure 3.

Note: These categories are not mutually exclusive. Veterans may have served in more than one period.
Source: 2017 American Community Survey one-year estimates

Educational attainment levels for veterans differ from those of nonveterans (see Figure 4). However, roughly the same percentage (56 percent) of both groups report at least some college or higher.

Veterans, however, tend to report higher incomes (see Figure 5). The median annual income for veterans overall exceeded $37,600, compared to about $28,500 for nonveterans.

Figure 5: Median income of veterans and nonveterans by gender

As World War II and Korean War veterans have aged, the number of veterans in the state has steadily declined. For example, back in 2010, Indiana had nearly 490,000 veterans compared to the approximately 410,000 today.1 The Department of Veterans Affairs projects that the veteran population will continue to drop, and Indiana will have roughly half as many veterans in 2045 compared to 2015 levels (see Figure 6).

Additional data on veterans can be found at the National Center for Veterans Analysis and Statistics, the Department of Veterans Affairs’ Open Data Portal, and the Census Bureau’s American FactFinder.

What do job openings tell us about our economy?