Guided by a commitment to transparency for Indiana taxpayers, the Department of Local Government Finance (DLGF), the State Board of Accounts (SBOA), and the Indiana Business Research Center (IBRC) launched a new data reporting system for local governments in 2011. The system, entitled Indiana Gateway for Government Units, is a web portal that allows local governments to submit specific forms and reports to state agencies online.

The Gateway has two main functions:

The initial phase of the project launched in July 2011. In the first phase, the DLGF collected forms for budget year 2012 through Gateway for all units of local government except schools. From July to November 2011 more than 41,000 budget forms were submitted. These participating units gave overwhelmingly positive feedback. While previously these 41,000 forms were printed, transported, and stored at both the local and state level, Gateway allowed for instantaneous transmission and represented a major step forward for streamlining local government administration.

The second phase of the Gateway project began in November 2011 to collect debt reports through Gateway. All political subdivisions in Indiana are required to submit debt forms to DLGF. While previously done on paper, Gateway's online debt management application is now open for reporting. Two weeks before the reporting deadline (which is March 1, 2012), 25 percent of units had already reported more than $2.4 billion in outstanding debt. 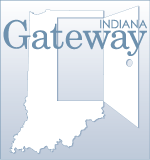 The most exciting aspect of the Gateway project is its public access component: https://gateway.ifionline.org. The project has been noted in a recent issue of Governing Magazine as "cutting edge".1 The electronic collection of data has allowed the information to be placed in an online, statewide database. Standardized taxpayer-friendly dynamic reports summarize local unit spending and revenue. These data are also available for download, which facilitates the easy generation of specialized reports that can be used by the public, General Assembly, trade organizations, financial advisors and the media. The public access side of Gateway provides transparency to local government data in Indiana in a way that has never before been easily available. Already, the details of $8.6 billion in appropriations adopted by local units for 2012 are available online. Constituents can enter their address and find each unit to which they pay property taxes. From there, an individual can drill down to look at the adopted tax rates, appropriations and cash balances for each unit of government.

The public access site is also a valuable tool for local governments by allowing easier comparisons across local units. This could enable local governments to identify best practices or to identify efficiencies by being better able to directly compare budgets and expenditures to their peers.

Launched in November, the public access site has quickly become a valuable resource. The website received hits from nearly 30,000 users since it became public. An individualized report builder on the website has been used more than 37,000 times and the statewide data files have been downloaded over 1,500 times. The Gateway public access project was the topic of a December 2011 column written by Purdue economist Dr. Larry DeBoer. He explained, "I understand there's more to come, but there's already more government data here than has ever been available this easily. So, Department of Local Government Finance: Please sirs, can we have some more?"2

We are pleased to announce that more is on the way. This May, there will be a significant update to the public access website which will include the annual financial reports of expenditures made in 2011, further integration with IBRC demographic data, and incorporation of property assessment data. Once fully implemented, the public access site will allow budget, revenue and expenditure data to be cross-referenced with other data sets such as economic data like unemployment rates or median income, population data for per capita analysis, and comparisons with other units based on criteria like size, income and demographics. GIS technology will also allow for the creation of maps, giving users the opportunity to study other communities near them.

Additionally, two more key expansions of the Gateway project will occur in 2012. The DLGF will begin requiring submission of school budget forms through Gateway for budget year 2013, which will allow for school data in the public access site. Furthermore, the sales disclosure forms which provide key data for the creation of assessed values will be incorporated into the Gateway application in August 2012.

While much work remains to be done on the Gateway project, all members involved are excited about the challenges and look forward to completing this project in service to Indiana taxpayers. If you'd like to learn more about the Gateway, feel free to contact the IBRC at ibrc@iu.edu.

Top Level Degrees in Indiana: A Look at the Numbers
Union Membership in Indiana